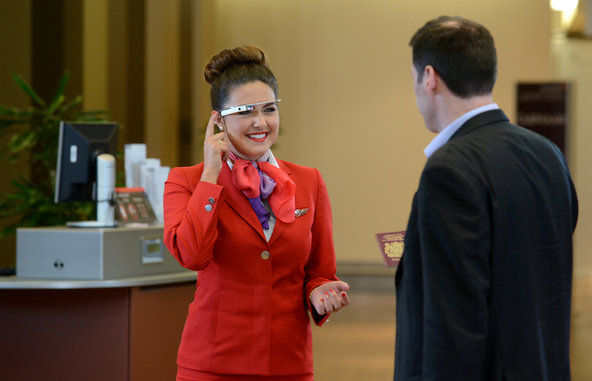 LONDON – For tech-savvy Britons, the debut in this country of Google’s Glass headset on Monday was greeted with much fanfare.

Yet less than a week since the release, the device has run into potential trouble with Britain’s tough data protection rules.

The headset, which retails at about $1,700 compared to $1,000 in the United States, lets users stream online information like emails and map instructions onto a lens screen and take pictures and video of others around them.

In a blog post, Andrew Paterson, the senior technology officer at the Information Commissioner’s Office, the British data regulator, said that Glass users were free to use the headset for personal use, but that restrictions would apply for businesses.

If the headset is used for business purposes — Virgin Atlantic, for instance, is testing the headset for checking in airline passengers — then Glass users would have to comply with the country’s data rules, Mr. Paterson wrote.

That includes explaining to others how data collected through the headset could be used, deleting digital information when it is no longer needed and making sure all the data is stored securely.

“People will understandably have reservations about the increasing amounts of personal information that these products are capable of collecting and transmitting,” said Mr. Paterson, in reference to Glass and other tech products like smartwatches that are commonly known as “wearables.”

“Organizations must not lose sight of the fact that wearables must still operate in compliance with the law and consumers’ personal information must be looked after,” he said.

A Google spokeswoman declined to comment specifically about the British regulator’s comments, but said that the company had designed the product with privacy in mind.

“The fact that Glass is worn above the eyes and the screen lights up whenever it’s activated clearly signals it’s in use and makes it a fairly lousy surveillance device,” she said.

By weighing into the privacy debate surrounding Glass, the British regulator is highlighting growing concerns across Europe over how people’s online data could potentially be misused.

The European Union is currently finalizing new privacy rules that will place tougher restrictions on how companies use customers’ online information.

And in the wake of revelations from Edward J. Snowden, the former National Security Agency contractor, about alleged spying activities by American and British intelligence agencies, Europeans are becoming more vocal about who has access to their data.

In the latest sign of a potential pushing back against American companies, the German government announced on Thursday that it had cancelled a contract with the American telecom operator Verizon Communications because of security concerns related to the N.S.A. scandal.

While Google Glass is not linked to these governmental attempts to get hold of users’ data, there has been a groundswell of anger about how some people – sometimes derisively called “Glassholes” – use the high-tech headset.

In the United States, where the product has been available since last year, some restaurants and other businesses have banned its use, while people have voiced anger that they could be videoed or photographed without their permission.

In response, Google has launched its own etiquette guide. Tips include basic rules like “don’t be creepy or rude,” and “ask for permission” before taking photos of other people.

In Britain, coffee stores and movie theaters have either banned the use of the headset, or asked people to refrain from taking photographs of their staff.

And the country’s Department for Transport, which oversees the British road network, says it is illegal to view a screen, including Glass, while driving, unless it is related to driving information.

When asked whether Glass users could use the headset while driving if they were checking GPS instructions, a government spokesman declined to comment, but added that the British authorities were continuing to discuss the issue with Google.